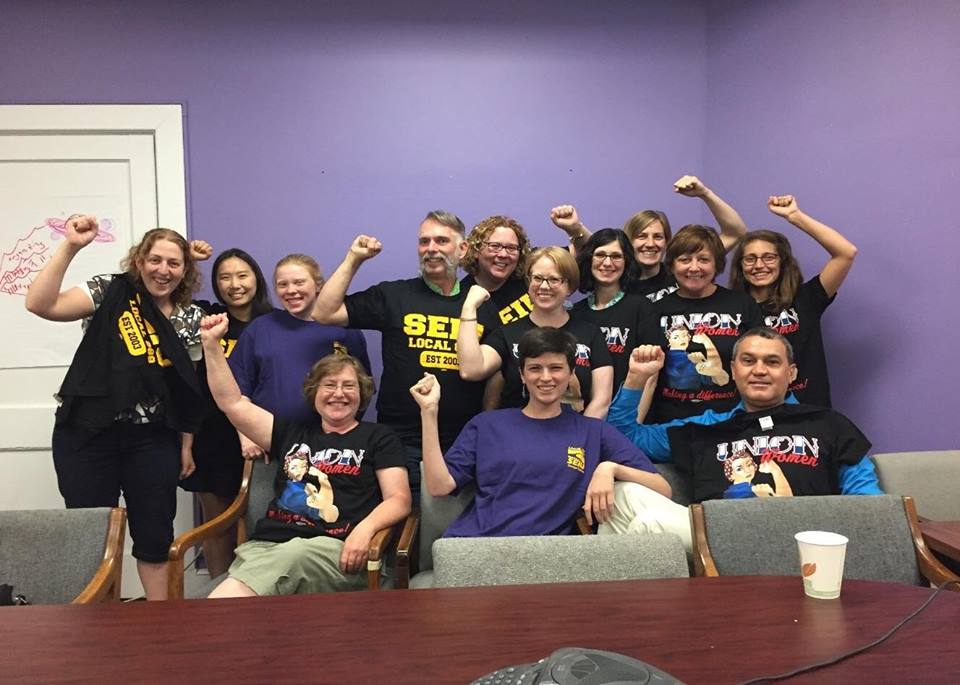 In January 2014, two Emerson College Staff members in the Visual & Media Arts Department (Anna Feder and John-Albert Moseley) reached out to SEIU Local 888 and invited the organization to help Emerson College staff organize a new bargaining unit of clerical, technical, and professional employees. Staff began to share experiences and stories to form a common bond and shared solidarity. Outcomes from the 2013 compensation study and the 2014 Emerson360 climate survey gave us data to address what we already knew: there were gross inequalities in our positions, job titles, HR policies, and, of course, salaries at Emerson.

SEIU Union organizers Rudy Renaud, Colleen Fitzpatrick, and Gayle McMahon helped us launch the Our Emerson organizing campaign. During this drive, Our Emerson received support from other SEIU chapters across the city, as well as supporting endeavors from Emerson’s two faculty unions: ACCAAUP (tenured and tenure-track faculty) and AAUP-Affiliated Faculty of Emerson College. In 2016, affiliated faculty at Emerson’s Los Angeles Center organized and successfully negotiated their first contract (ELAF-AAUP), now leaving Emerson’s clerical, technical, and professional staff as the only unrepresented Emerson staff.

Students from P.R.I.D.E. (Progressive & Radicals in Defense of Employees) stood with Our Emerson staff during a rally on October 14, 2015, asking President M. Lee Pelton to pledge neutrality for staff members who wished to organize on campus for a union card drive to trigger a National Labor Relations Board (NLRB)-sponsored election. A small group of Our Emerson leaders  and P.R.I.D.E. representatives met with President Pelton on April 1, 2016 to set the tone of our relationship moving forward prior to a union election. “Our Voice, Our Union, Our Emerson.”

On April 7, 2016, staff members in Academic Affairs held an NLRB-supervised election for union representation. The vote in favor of unionizing passed 59–7. A second election was held on May 3, 2016, for staff in Information Technology, Communications & Marketing, and Institutional Advancement, which also resulted in favor of unionizing. In the summer of 2016, union members held elections by departments to establish our first Contract Negotiations Committee of about 20 union members. We held our first contract negotiations session with the administration on August 30, 2016, with Ron Patenaude from SEIU Local 888 as our negotiator. Since then, we have held more than 30 negotiation sessions with the College administration.

As of July 2018, the Union is proud to have finalized a first contract with the College.

Emerson Staff Union would like to give thanks to our fellow staff members. Thank you for all you have done to make @EmersonCollege a better place to work. We hope you enjoy the holiday break with friends and family. #thankful #happythanksgiving #unionstrong

As #Thanksgiving approaches, let's not forget the incalculable loss experienced by Indigenous peoples. For many it is #NationalDayofMourning. Learn more about United American Indians of New England http://uaine.org & the annual march in Plymouth: https://forms.gle/ySp32ehFzVmoftdG8

A COLA win for us will deliver a lesson to millions of workers across the state who are also squeezed between the bosses’ wage suppression and the landlords’ rent hikes: You can fight, and you can win.

Contingent faculty & librarians picketing in solidarity with #UAWonStrike for a #FairUCNow https://twitter.com/UCAFT_UCLA/status/1595180207006064640